Asamoah Gyan has today announced his support for the global World Walks for Water and Sanitation event that demands action to address the world’s largest crisis – water and sanitation.

From 17 to 25 March 2012, thousands of people will walk together to demand political change. They walk to strengthen national advocacy around the crisis and get government ministers to attend the Sanitation and Water for All High-Level Meeting in April 2012, where necessary steps to end the crisis can be taken.

The Asamoah Gyan Foundation will launch in June 2012 and work on improving Water, Sanitation and Hygiene related issues, especially as they affect girls. As a close partner of WASH United, one of organizers of the World Walks for Water and Sanitation event, Asamoah Gyan is looking forward to participating and has shot this short video to mobilize people around the world to join or organise a Walk!

By acting together all over the world, we can make governments take the actions needed to ensure clean water and sanitation for all. Now is the time to tell the world's politicians about our concern! Now is the time the World Walks for Water and Sanitation!

To find out where a walk is taking place close to you, visit www.worldwalksforwater.org.

Posted by Jen Williams at 17:13 No comments:

2012: High expectations of the Sanitation and Water for All High Level Meeting 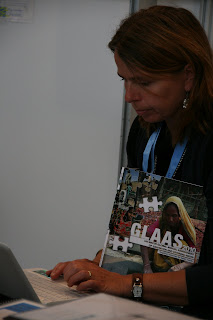 Rolien Sasse is the CEO of Simavi in the Netherlands, a founding member of the End Water Poverty campaign. Here, she shares her expectations for 2012 of the Sanitation and Water for All Partnership.

On 20 April 2012, the Sanitation and Water for All High Level Meeting (SWA-HLM) will take place in Washington DC. And at the end of 2011, the Dutch government that our Minister of International Cooperation, Mr. Ben Knapen, intends to be present!


Soon after this, the United Kingdom, Switzerland and the United States confirmed that they are intending to attend at a Ministerial level too! These are hugely important steps and will encourage civil society organisations and those governments attending the meeting to push other political leaders to join them.

The Dutch government has also gone a step further by promising to take the lead in coordinating and fine-tuning the promises that European donor countries will bring to the High-Level Meeting. As a world leader in water with proven active involvement and support for the SWA process, this is a perfect role for the Dutch government. And I hope that they help to ensure good outcomes from the meeting!

Within the End Water Poverty network of over 180 civil society organisations worldwide, we exchange information about Sanitation and Water for All. And it is good to hear that both in developing countries and in donor countries, civil society organizations are involved in national preparatory processes. This will increase the chances of an effective High Level Meeting and ensure that voices from marginalized groups are heard.

And that is my simple expectation for 2012 from the SWA as a political process: a successful High Level Meeting. This will lead to direct results on awareness and increased political commitment towards the realization of safe drinking water and sanitation for all, especially marginalized groups. As a Steering Committee member representing the civil society organizations within the EWP network, I am looking forward to working towards a successful High-Level Meeting together.

Posted by Jen Williams at 11:36 No comments:

Email ThisBlogThis!Share to TwitterShare to FacebookShare to Pinterest
Labels: end water poverty, High-Level meeting, sanitation and water for all

If you read our blogs and get our newsletters, you have probably heard us mentioning Twitter and 'tweets' pretty regularly! But you might be wondering what this Twitter thing is and whether it's really worth your time and effort to get to grips with.

So, here is a very basic guide to Twitter and how you can get your organisation signed up and 'tweeting' today! Do have a go and if you have any questions at all, just send me an email (or a tweet?!) at jenniferwilliams@endwaterpoverty.org (or endwaterpoverty is our Twitter name!)

Twitter is a social network used by millions of people used to send quick, frequent updates telling your friends, family, co-workers, celebrities and others what you are doing. It's a great way to connect with other water and sanitation organisations, target decision makers, contact potential supporters and increase the reach of your organisation.

You will now be taken to a second screen where you can select a username. This is the name by which you will be known on Twitter. Your real name is probably best—if it’s available. If not, you can try using amiddle initial or an abbreviation.

Next, Twitter will assist you in getting started. It will give you the opportunity to “follow” a few friends or celebrities. You can opt out of these steps by clicking the ‘Skip this step’link. Twitter will also give you a chance to see if some of your friends are on Twitter by checking your online address book. However, your contacts will have to use GMail, Hotmail, Yahoo, or AOL for you to find them.

2. Choose your settings
To do this, go to your Twitter homepage and click on the ‘Settings’ link. Make whatever other changes you want and click ‘Save’.

Now click on the Profile tab where you can upload your picture. This is important because many Twitter users won’t follow you if you don’t have a picture – they won’t know if it’s you or not! You can also enter your location, website address and a brief bio/ statement about yourself.
When you are finished, click the ‘Save’ button

If you haven’t done so already, add your family and friends by clicking in the ‘Search’ field at the top of your home page. You can type in a username or first and last name. When you do, you will get a list of users who match your search criteria.

You can begin “following” them by simply clicking on the ‘Follow’ button.

4. Learn the basic commands for Tweeting

Think of Twitter as a conversation. When you update your status, you are speaking to all of your followers- and sometimes their followers too and so on. Everyone can hear what you have to say.

‘Reply’: If you want to direct your comments to one specific person but you are happy for everyone else to see this, use the ‘Reply’ function. You address the person by using the @symbol followed immediately by their Twitter username.

For example: @EndWaterPoverty I am organizing a Crisis Talk in Ghana.

You can also use the @ function to refer to someone by name.

For example: I am really enjoying the planning meeting organized by @EndWaterPoverty and @FANnetwork.

The thing about using @ is that they are “clickable links.” If someone who is following me, clicks on one of the names eg. @FANnetwork they will automatically go to that person/organisation’s Twitter page. This will give them the opportunity to follow that person too.

Direct Messages: You can use direct messages to send a message to someone that nobody else will be able to see. To use this, simply click on the envelope picture.

Hashtags: A # symbol, called a hashtag, is used to mark keywords or topics in a post (tweet). It can be used as a way to categorize messages. It means that if you click on a hash tag, it will show you all the other tweets associated with that particular hashtag. For example, we are using #walksforwater for the World Walks for Water and Sanitation campaign.

Length of tweet: The main thing you need to know is that the message can be no longer than 140 characters long. If you use the website, the entry field will automatically count your characters.

How often? People disagree about this – some people say no more than six times a day, some people say you can tweet up to 10 times a day! So, it’s up to you! It might take you a while to get started so perhaps aim for once a day at first and build up your tweets from there!

Ready to get started? Why not send your first tweet now and mention us?! @endwaterpoverty

Posted by Jen Williams at 11:02 No comments:

Boosting of efforts and a new zeal: Expectations from SWA during 2012

In between two SACOSANs (South Asia Conference on Sanitation) held in Delhi in 2009 and Colombo in 2011 a total of 750,000 children died in South-Asia. This attributes to poor sanitation, water quality and hygiene practice level prevalent in the region. Reasons behind poor progress despite efforts made can be viewed as – lack of broad based political will with clear-cut directions, absence of policies that support the sector to make visible progress in terms of benefits, lack of long-term action plans and insufficient resource mobilization. Communities are also absent in the planning and implementation process resulting in a lack of sustainable improvements to the situation.

ter for All (SWA) is a global partnership between developing countries, donors, multilateral agencies, civil societies and development organizations committed to addressing all the above mentioned critical barriers to achieving universal and sustainable sanitation and drinking water access for everyone, with a an immediate focus on achieving the Millennium Development Goals. As a member of the Steering Committee from the Civil Society Organizations in the South-Asia Region, I would like to see an upward trend in the national level achievement which contributes to all the countries in the region achieving the MDGs on water and sanitation.

This is not an easy task to elaborate within a few words! The first and foremost task of all the actors in the region ideally be a time bound and evidence based action plan supported by donors along with a strong and clear monitoring mechanism . Due to the effects of climate change , many of the countries in this region face innumerable loss in terms of assets and livelihood opportunities along with poor water and sanitation infrastructure. SWA needs to take a clear stand on this issue to reduce the suffering of these climate change victims. Diverse cultural contexts are also another point of concern in respect of equitable access to water and sanitation for many of the indigenous communities. The Sanitation and Water for All Partnership needs to bring this to the notice of the national governments in the region to ensure equity and justice.

Since 2012 is quite close to the MDG timeline, we need to boost up the collective efforts to fulfil water and sanitation commitments. This is a human rights issue. Government and Civil Society Organizations in the region need to work shoulder to shoulder on this. The SWA can bring attention to these issues and help to ensure that the required capacity is installed in the Government and Civil Society Organizations that will help in achieving the MDG.

To give my presence and participation in the SWA process a new zeal, I plan to be more active and vibrant in advocating the issues of critical concern. I want to reduce the sufferings of the people in this region and thus I need more and more support, encouragement, knowledge and guidance from the FANSA family and beyond.

Posted by Jen Williams at 11:00 No comments: