World Water Day in the US

World Water Day 2011 provided a coalition of US water organizations, led by WaterAid, the WASH Advocacy Initiative, Population Services International, Millennium Water Alliance, CARE, and others, with several opportunities to raise awareness of the global water and sanitation crisis.

Our campaign began the Friday before World Water Day, when our innovative Donate Your Voice campaign was launched. The campaign enabled people to provide, temporary access to Facebook and Twitter feeds so that we could automatically post awareness-raising messages each day of World Water Week.

By the end of the week, more than 2,000 accounts had been donated and, aggregating all Facebook friends and Twitter followers of those donors, more than two million people were listening to our messages! Our tweets were shared by a wide range of high-profile people and organizations,, including the International Center for Research on Women, New York Times columnist Nick Kristof, and Senator Richard Durbin.

The coalition also undertook direct advocacy as part of the broader World Water Day campaign. Nearly 90 advocates signed up to participate in an advocacy day in Washington, DC, and reached more than 80 House and Senate offices with messages about the importance of water and sanitation to US international development assistance. A briefing for Congressional staff, held in one of the most famous and beautiful rooms on Capitol Hill and including speakers from the US government, World Bank, private sector and think tanks, attracted a wide range of attendees and packed the room. 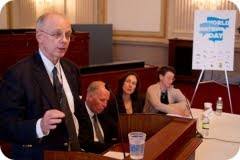 Chris Holmes, Global Water Coordinator of USAID, provides an overview of the US Government’s investments in WASH programming to a packed Congressional briefing. Photo: Bill Crandall

On World Water Day itself, WaterAid in America CEO David Winder spoke to a crowd of more than 800 people at a high-level event at the World Bank. as a guest of Steve Hilton of the Conrad N. Hilton Foundation, the World Bank, and the US Department of State. Among the exciting announcements made at the event and in the week prior were:

· a $50 million dollar five-year commitment from the Hilton Foundation for WASH programming;

· the signing of a Memorandum of Understanding by World Bank President Bob Zoellick and US Secretary of State Hillary Clinton, which will “strengthen support to developing countries seeking a water secure future;” and

· the Senate reintroduction of the Water for the World Act, which has bipartisan support and aims to improve the programs implemented under the 2005 Senator Paul Simon Water for the Poor Act. 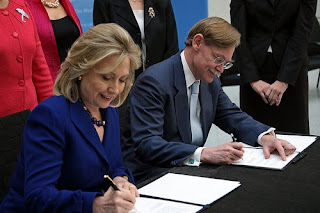 Three days of Washington-based activities, ranging from technical workshops to happy hour celebrations, further strengthened the existing advocacy and campaign coalition pushing for increased US investment in pro-poor water, sanitation and hygiene programming. With more than two million people learning more through our social media campaign, the groundwork for an even bigger World Water Day campaign in 2012 has been laid.