Getting the message to MPs in the UK 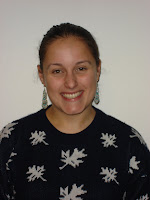 It’s always interesting to see how an event takes shape from the nerve centre of an operation and as this is my first event experience working for WaterAid, I turned up pen and paper in hand ready to get excited and I was not let down....

It was great to see how the teams from WaterAid and Tearfund were working together with so much passion. There is a real enthusiasm to see how we could get involved in the global events that everyone is organising. It’s been inspiring to see what other groups are organising to achieve the aims of keeping the WASH crisis front of mind for all those who can make such a major difference.

In the UK we’ll be using the opportunity to organise a walk close to the Houses of Parliament on Tuesday March 22nd. We’ll be hoping to set up challenges like carrying around jerry cans and using large placards with info around a key location to really bring home the global crisis to MPs in London on the day.

Everyday 4,000 children die needlessly due to diarrhoea as a result of not having access to clean water and sanitation. WaterAid's aim for 2015 is to ensure 25 million people will have access to safe water, improved hygiene and sanitation as a direct result of our work. But we can only do this with strong political commitment to intervening in the crisis now.

But it’s not just about MPs, we’d like to see everyone getting involved on the day and a wide selection of supporters, whether old or new attending to so that everyone feels a sense of solidarity with the thousands round the world who will be taking part.

Our teams working in the field continue to do great work, but they can only do so with the support and voices of people who can make a difference demanding from authorities like the coalition government they do; so your influence will really be crucial on March 22nd. There are plenty of ways to get involved in the run up and on the day, either by expressing interest in attending or shouting about the World Walks for Water via social media – please check out www.wateraid.org follow @WaterAid and the @World Walks for Water on Twitter, or join our facebook group to find out the latest updates.
Posted by Serena O'Sullivan at 12:37 No comments:

The World Walks for Water is going global...and online!

Some great news from behind the scenes on the World Walks for Water, as we're hearing of some fantastic activities being organised across the world by brilliant campaigners. Just a few to highlight that we've heard about so far:
Other exciting and innovative walks are being registered every day. If you're organising one, don't forget to register on the website and let us know if you'd like to write a blog post on your Walk!

Less than two months to go - so exciting! Good luck everyone!
Posted by Serena O'Sullivan at 12:03 No comments:

A campaign whose time has come 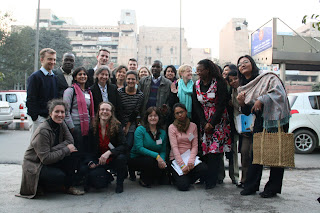 End Water Poverty is really moving on as a campaign and last week’s planning meeting marked a great step forward. Campaigners from 14 countries came together in Delhi, India, to celebrate our successes, to assess the current situation and to plan the way forward for the next three years.

We have decided on three clear aims:
1. to campaign for more funding for water and sanitation and for funding to be better targeted for those who need it most
2. to campaign for the ongoing success of the Sanitation and Water for All high level partnership in delivering the funding needed for national sanitation and water plans – and checking that it is spent in the rights ways to really benefit the poorest
3. to campaign together with health and education campaigners to get the message about the water and sanitation crisis across, and the results of this crisis on children’s education and health especially.

We were really inspired by hearing each others’ stories of mass campaigns of thousands of people, and really effective lobbying which has resulted in changes in government policies in many countries. We drew wonderful pictures to show some of the amazing Walks and ‘March Pasts’ planned for ‘The World Walks for Water’ in March too – its going to be big!


It was great to be together and to see the campaign continuing to grow as a relentless, unstoppable, global movement for change which comes out of such vibrant national campaigns, encourages and supports national campaigning and takes our demands to the global level too.
Posted by Serena O'Sullivan at 21:59 No comments:

The people and power of Sivanand slum 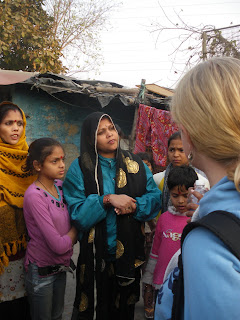 We're in Delhi this week as you may know - building a three year campaign strategy that hopes to mobilise millions to campaign on water and sanitation. This has meant hours of group work with flip charts, brainstorms and discussion in a basement meeting room, but luckily we also had the chance to visit a WaterAid project in the east of the city to see how grassroots advocacy is making a difference for the urban poor.
A group of End Water Poverty campaigners spent time in the Sivanand slum, in East Delhi, largely populated with the rickshaw pullers and domestic workers of the area, to learn how residents are using local legislation and human rights awareness to ensure access to water and sanitation.
As soon as we arrived, guided by WaterAid India staff, we were proudly shown the three massive water tanks that the municipal government has provided the slum following successful advocacy. Speaking to local women, the difference this water provision has made is immense. Shashi Paharia (centre in photo) says now that she doesn't have to go far to find water or wait for the water trucks, "Life is simply easier. We have time now to walk with our children to the school, to spend time cooking and more time for work and to spend with our family in the evening."
Shashi is a leader in the community's water and sanitation committee which acts as a watchdog of the government provided facilities and mobilises the community to make a stand for their right to water and sanitation. They monitor the attendance of government sanitation workers in the community, even using facebook to report non-attendance using the city government's facebook page! They use India's Right to Information Act to find out why maintenance isn't carried out on the sewerage system and demand change if so.
The water situation in Sivanand is improving, with Shashi sharing that people are healthier and happier as a result. But there is still much work to do. There are 400 households in Sivanand and 20 toilets. Nine aren't working. This means massive queues in the morning - resulting in lateness at work and school, and unfortunately open-defecation in the community.
But the community has rallied - just today they have written a letter to the government demanding that the toilet block caretaker makes more regular visits so maintenance can take place. Judging by the success with the water provision, there's no doubt they'll succeed in their advocacy efforts to get adequate sanitation - and we'll be watching and supporting them along the way!
Posted by Serena O'Sullivan at 12:42 No comments:

Turning on the campaigning heat in a very cold Delhi...

It's my favourite time of my work year - when I get the chance to sit in a room with campaigners from around the world for a whole week to strategise. Doesn't sound like fun I'm sure for lots of people!
But the End Water Poverty planning meeting takes place once a year (last time in Accra) and is a crucial chance to gather our campaigners from Africa, Asia, North America and Europe to hear success stories and national priorities. We also carry out joint analyses of the political, cultural and social context and host 'spotlight' sessions on different themes, like the right to water and sanitation. Project visits across Delhi are happening too - so we can see problems on the ground.
Then through the week we take this learning and pull it together, along with information gathered from our global consultation, into a strategy. And this year we're compiling a three year strategy instead of our usual one/two year strategy. So we're being ambitious!
We're also being frozen too! Delhi is in the depths of a wintery cold snap - and our colleagues from warmer climes are suffering in the cold hotel rooms (Indian buildings are understandably not designed to hold in heat!). But although we're freezing, there are great ideas and ambitious campaigning strategies flying out of the group.
We'll keep you posted through the week!
Posted by Serena O'Sullivan at 11:19 No comments: