Poo on the loose in New York! 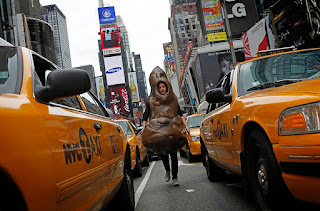 There's been a new menace on the loose in New York this week.
A huge, massive, dangerous poo.
WaterAid is in New York and making the case for sanitation - the world's most ignored killer - taking the lives of 4000 children under five every single day.
They've brought with them an amazing poo costume, that has been causing a stir right across town, but it's been doing an amazing job at raising the profile of sanitation at the MDG Summit.
You can keep up with WaterAid's MDG campaign on their blog, and see End Water Poverty's very own Steve Cockburn in the costume (thanks to David at Save the Children for doing the filming!) below. Enjoy!
Posted by Serena O'Sullivan at 21:43