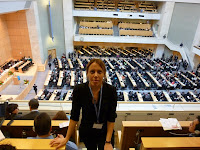 
Yael works for WaterAid, a member of End Water Poverty, and shares here exciting developments from the World Health Assembly for WASH and child health advocates:


Last week I attended the World Health Assembly in Geneva, the annual meeting in which member countries of the World Health Organisation come together to discuss global health issues. WaterAid was participating as part of the NGO delegation, comprised of World Vision, Save the Children, Oxfam, Action for Global Health and VSO.

There were several highlights from the week, but significantly:

• WASH in the resolution on nutrition: The text drafted by WaterAid on the role of access to WASH in preventing child under-nutrition was inserted word-for-word into the WHO resolution on Infant and Young Child Nutrition. Prior to this, neither the resolution nor the WHO Secretariat report which informed it contained any reference to WASH.

• WaterAid partner to hosting a successful side event: along with the above NGOs, WaterAid co-hosted a successful side event within the Palais de Nations, addressing equity in access to healthcare services. The event was well-attended and included an informative and engaging discussion. There was real interest in WaterAid's forthcoming report "The sanitation problem: what can and should the health sector do?" and we distributed a flyer available here.

• Water and sanitation in next year’s Assembly: it is possible that discussions on sanitation and water will be included, for the first time, on the official agenda of the next World Health Assembly. This signifies a possible wind-change in the attitude of health-sector decision-makers to sanitation and water as key determinants of health.

This experience has shown that the World Health Assembly is a viable and potentially rich advocacy target for our work to engage the health sector.
Posted by Serena O'Sullivan at 15:34 No comments:

A new online advocacy tool for the WASH sector has been developed. The website www.WASHwatch.org aims to make it easy for civil society to monitor their governments’ political declarations on WASH, such as eThekwini in Africa and SACOSAN in South Asia. CSOs can also upload government budget data to compare how countries are prioritising the sector.

End Water Poverty members can log onto the site at www.WASHwatch.org. As it is currently a pilot version, WASHwatch.org is password-protected, so email washwatch@gmail.com to be sent the username and password. Through feedback from contributors, a final public version will be developed in due course.

WASHwatch.org aims to make advocacy easier in the following ways

1. Easy comparison of different countries’ progress against political commitments like eThekwini and SACOSAN.
2. Easy tracking of government budgets for WASH, and quick comparison to neighbouring countries
3. Easy printing of the data to take to a meeting

However, the availability of good information depends on contributors being willing to upload analysis about their countries policies and budgets. End Water Poverty members are in a strong position to be able to do this.

It is easy to log on and upload information about your country. Visit the site to see what others have already uploaded; pages for Nepal and Nigeria have the most complete information. If you want to be able to edit your country’s page, or have any questions, email washwatch@gmail.com and you will be sent a contributor login and password.

Even if someone has already uploaded information about your country, do get involved and add more. One long-term aim of WASHwatch.org is to build consensus across civil society about the reforms necessary in the sector, and to foster collaboration between different organisations at the national level.
Posted by Serena O'Sullivan at 15:02 No comments:

Proud but not satisfied: what’s been achieved, and what’s left to fight for

Steve Cockburn
International Campaign Coordinator
End Water Poverty
Just over a week on from the High-Level Meeting on Sanitation and Water, and with the ‘Chair’s Summary’ now providing the official outcomes of the meeting, we can reflect on a job well done, but also much more left to do.

Over the last three years, over one million of you have campaigned in support of a new global process to achieve sanitation and water for all. And we got it, with the new ‘Sanitation and Water for All’ initiative launched by 32 countries, and numerous UN agencies and civil society organisations.

Furthermore, just over a month ago, over 100,000 of you in 80 countries stood up together as part of the World’s Longest Toilet Queue to demand action in the first ever High-Level Meeting on Sanitation and Water. They heard us, and took a vital step forward, but it's a step that starts our journey.

There are significant achievements to highlight. Bringing finance ministers and water ministers from over 20 developing countries together with all the major donors – and getting commitment to action from both – is no small feat. Nor is a collective agreement to improve the way finances are targeted towards low-income countries and poor communities, and to mobilise additional efforts to develop and coordinate effective national water and sanitation plans.

But processes themselves don’t ensure people’s rights to clean water and a safe toilet, nor prevent the deaths of children, nor keep girls in school. That will require more finance, better used, and genuine leadership.

On this we have much further to go. We did see commitments from a number of developing countries to spend more – Bangladesh, for example, committed an extra $200m over the next 5 years – but no rich country put more money on the table. That will have to change.

We also saw Ministers of Finance and Ministers of Water representing developing countries – and working together in a new way that will boost domestic investment – but only one Minister of a donor country. That will have to change too.

If you compare the Chair’s Summary to our joint manifesto, you can see that what is most lacking are the numbers - the deadlines and the dollar signs that we need to really drive progress. There is an explicit promise to develop these following the meeting, so we must make sure this happens.

So that is our next challenge, and why we need to keep campaigning to ensure that words are turned into water. That means getting this progress recognised by the G8 at their Summit in June, ensuring world leaders prioritise sanitation at the UN High-Level Plenary on the MDGs in September, and ultimately making sure individual governments step and deliver what they promised.

We’ll be sharing our campaign plans soon, but it’s worth reflecting on just how important the campaigning to date has been. It has put the issue on the agenda, it has given civil society organisations a strong voice at the table, it has pushed individual governments to act, and it has provided us with a very strong platform to go forward. This would not have happened without you.

Perhaps a simple, clear example is a statement made by the Ghanaian Minister of Finance. Campaign groups had been very active in Ghana, undertaking impressive campaign, media and lobby work that led to a national ‘compact’ outlining what they would do. Quite simply he said: “We spent $85m to fight malaria, but neglected sanitation. We will now put more money into sanitation”.

Some links to other documents: