Happy World Toilet Day to everyone!
It's a day organised by the World Toilet Organisation - and aims to bring attention to the 2.5 billion people around the world without access to a safe and sanitary toilet. And the 4000 children dying as a result.
Today has seen activism from End Water Poverty members all over the world - from flash squats in Singapore, to a 'makeunder' of men's loos in London, to inspiring lobbying done in India towards politicians.
We've also had a letter published in the Guardian from doctors across Europe, outlining that good sanitation is the key to child health.
End Water Poverty is also joining in with a 'twitter petition' - do go along to the website and get involved by signing and promoting to your followers. If you don't have twitter then you can sign a petition on the main website.
Hope you can join in and make a difference!
Posted by Serena O'Sullivan at 13:20 No comments:

FAN members across the world are working in very different contexts but facing similar challenges. Whilst they are working tirelessly to make governments more responsible and to ensure recognition and protection of the fundamental human right to water and sanitation of all people, 4,000 children are still dying every day from diarrhoea related diseases. This shocking statistic is entirely preventable.

I’m really excited about the World’s Longest Toilet queue as it’s a fantastic opportunity to take part in a global activity that unites all of our members in solidarity. Whilst taking part in this campaign action, groups can tailor their local or national activities to suit their own issues and demands to government around the water and sanitation crisis whilst knowing that others, all over the world, are doing something similar on exactly the same day.

This combined effort should increase pressure on policy-makers. As footage of the queues and news of lobbying activities is cascaded through word of mouth, newspapers, TV, radio, social networking sites like twitter and facebook and websites all over the world, it will be impossible to ignore the scale of the global crisis and the spotlight will be firmly focused decision-makers to take action to respond.

Success relies on community and NGO mobilization. So please do get involved!
Posted by isabella at 13:44 No comments:

Africa Water Week draws to a close today and I’m catching my flight back to wintry London. Brrr! Just time to sum up some highlights of the week:

And now to catch that flight, and find my woolly cardigan...

Posted by Serena O'Sullivan at 10:50 No comments:

Global political platform of support for water and sanitation

Ellen Johnson-Sirleaf, President of Liberia, has been appointed the first African WASH Ambassador.

In a glittering ceremony and initiative organised by ANEW, AMCOW and WaterAid at Africa Water Week, the President gave a video address on why she took the role:

Great words, and a massive coup: Johnson will take the voices of her nation and Africa to world leaders and the global political platform, highlighting the Africa Water Week’s call – ‘No Water – No Life’. Congratulations!

Posted by Serena O'Sullivan at 08:02 No comments:

Phew, Africa Water Week is brilliant, but it sure is gruelling! Sessions, plenary, debates over coffee and its been peppered with great conversations and meetings with many members and partners. Not to mention surprise conversations with a Water Minister on his love of Mamma Mia.

The official opening was on Monday– with speeches from dignitaries and a group of Masai who proclaimed "We need water now! We want water now!" The week is focused on implementing prior commitments such as eThekwini, and the African Development Bank set the tone, demanding, "I ask you – do not make more commitments – take action". Something reiterated by civil society present at the meeting.

Clarissa Brocklehurst of UNICEF presented the current situation facing the water and sanitation sector, with the clear statement that we’re still facing a crisis in Africa. 58 countries are off track on the sanitation MDG round the world, with a startling 39 of them in Africa – meaning 315 million people who should have been served by 2015 won’t have been. It’s hard to hear for people working so hard, but drives us forward to achieve more – there’s a real need to focus donors, the public and developing governments onto sanitation, and it’s part of our job to do just that.

I’ve attended ‘Closing the Sanitation Gap’ sessions including a talk regarding future advocacy and campaigning opportunities following the successful UN International Year of Sanitation. The presenter, Jon Lane, gave The World’s Longest Toilet Queue as THE activity to get involved with next year! It was great to see that, and has got me thinking of the potential for the event to reach out to many NGOs and give us a joint global moment to push sanitation back on the agenda.

Then followed a hilarious conversation with a Water Minister (to remain unnamed!) on his love of Mama Mia (the West End version is better than the Broadway). Couldn’t comment as I haven’t seen them, but did discuss End Water Poverty – a great lobbying opportunity!

Will write up what’s happened since – including an extraordinary and groundbreaking commitment to water and sanitation from one of Africa’s leaders.

Posted by Serena O'Sullivan at 07:43 No comments:

Writing this amidst brilliant thunderstorms in Johannesburg from the 2nd Africa Water Week. Governments, donors, the private sector and civil society under one roof for a week – it’s bound to get interesting.


Sunday was great – a pre meeting civil society consultation which was organised by our friends at ANEW – the African Civil Society Network on Water and Sanitation. It was a chance for NGOs working on water and sanitation to come together and discuss the themes set for Africa Water Week and write a position statement on them. 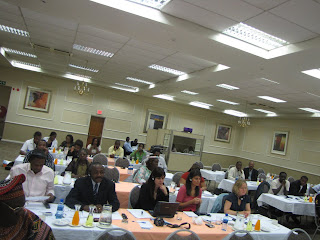 I was really pleased to be asked to share news about End Water Poverty and developments on our policy platform – the Global Framework for Action. I also got a chance to let people know about the World’s Longest Toilet Queue – an event we’ll be launching soon – and give the guide it’s first viewing!

Even better though was participating in discussions on the themes – including transboundary waters, addressing the sanitation gap, climate change adaptation and financing of the sector.

In forming our joint statement, not only did we make strong calls to our governments to deliver on their commitments, we also outlined actions we will take ourselves following the meeting– from lobbying and advocacy activities to monitoring implementation of projects. You can read the final statement here.

A great meeting on the Global Framework for Action also happened on Sunday - with positive discussions and developments, and we also have a meeting on the Framework to which all delegates are invited on Wednesday - updates to follow.

So a great start to the week – with much more promised for the next few days. Updates on Day 1 and Day 2 coming shortly!

Posted by Serena O'Sullivan at 09:36 No comments:

Will you make a stand for sanitation and water next year?

Exciting times! End Water Poverty is getting ready to launch ‘The World’s Longest Toilet Queue’- a mass global event on World Water Day next year (22 March 2010) that will call for action on water and sanitation from the world’s politicians. It’s a massive Guinness World Record attempt and needs you to get involved and make it a success.

The timing of the event is crucial – just one month after our mass global action, politicians will gather in Washington DC to discuss what they’re going to do to tackle the crisis claiming 4000 children’s lives every day. And it’s up to us to make sure they know that the world expects action.

So we’re challenging people, groups, organisations – in fact everyone – to organise groups of at least 25 people to queue at a toilet (real, fake – even someone dressed up as one!) on World Water Day. It’s up to you what happens in your Queue – perhaps you’ll do it in the style of a flash mob, or you’ll gather a petition from participants, or you’ll ask your local Parliamentarian or even leader to attend and listen to the demands of your Queue.

Get loads of ideas on the special World’s Longest Toilet Queue, including press templates, case studies, a toolkit, and posters. You'll be able to join an online Queue there too - and share this with your supporters, friends and contacts. Read ideas from other advocates and get involved by commenting, suggesting and sharing ideas. Already got ideas? Post them up here, right now!

This is truly anyone’s event to own – and we’re really excited to share it with you. Let’s make a stand together and make sure those politicians hear our voices loud and clear.
Posted by Serena O'Sullivan at 12:15 2 comments:

Putting the poor first in 2010

2010 is set to be a pivotal year in fight against poverty and climate change. And Canada, as hosts of both the G8 and G20, are set to be at the centre. And so I've spent the week in Ottawa with campaigners from all around the world planning the corresponding strategy for civil society action.

2010 is not only the year when Africa hosts the World Cup for the first time, it's also when the landmark 2005 G8 commitments to the continent - such as providing $ 50bn of additional aid - can truly be judged. And it will be done with a backdrop of crisis that is creating a real shift in global power.

The rising cost of food has pushed the number of hungry back above 1 billion, the financial crisis and recession has plunged millions into poverty, and a deal to protect the world's climate seems stuck in committee. These crises were caused by rich countries, yet most of their victims count amongst the poor.

In 2010 the answer to the question "Who rules?" will change - the global economy is seeing a radical shift. The G8 will be eclipsed by a new grouping - the G20 - which includes emerging power houses like China, Brazil and India.

So more voices from countries where many of the poor live, yet ultimately still a system where the poorest countries do not have a seat at the table to demand their rights or steer the global economy to meet their needs. And the G20 may prove to be as self-serving as the G8.

But we do know that, as power shifts, a time has appeared to bring the voices of the poor to the fore, and to make sure that their human rights - such as accessing clean water and safe sanitation - are on the table and at the heart of global debate.

For us, obviously there are huge opportunities in 2010 to push up the water and sanitation agenda - not least the global campaign to form the World's Longest Toilet Queue (20-22 March) and to influence the High-Level Meeting on Water and Sanitation (22 April) - but also a need to work together to push on all issues relating to global poverty.

Global campaign plans are crystallising and emerging soon, so more on that to come, but its worth noting that just a few weeks ago 173 million people stood up around the world to call for an end to poverty.

That's the biggest mass movement the world has ever seen, so using it to get food, water and a seat at the table for the world's poor should be well within our grasp.
Posted by Steve Cockburn at 12:07 No comments: