Mid August saw water and sanitation experts from around the world gather in Stockholm for World Water Week. It was both fascinating and exhausting taking part, as you may know from following our tweets. And it was great to see sanitation climb in profile, with Dr Bindeshwar 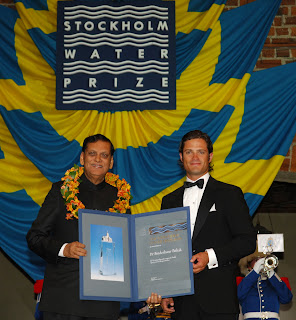 Pathak, founder of the Sulabh Sanitation Movement in India, being named the 2009 Stockholm Water Prize Laureate.

Amidst all the formal discussions on transboundary waters and climate change, there were an array of key meetings with governments, organisations and institutions working to realise End Water Poverty's call to establish a Global Framework for Action on Water and Sanitation.

While working on these meetings with colleagues from Liberia, Kenya and Asia, a few things became really clear to me:

In April 2010, political leaders from across the world will meet in Washington, USA to discuss water and sanitation at the first ever High-Level Meeting on the issues.

And what's the difference we're hoping for between Stockholm and Washington? One word: action. The High-Level Meeting is the opportunity for the world to act on water and sanitation, and it seems to me that mass mobilisation and campaigning in the next few months could ensure real change is achieved for those denied their rights to toilets and clean water.